2017 has been a crazy year in the world of education, with concerns about Brexit, British schools expanding into the wider world and of course Theresa May abandoning her flagship grammar schools policy after a disappointing election.

But what else went on?

One of the biggest stories earlier in the year was that SRE (sex and relationship education) became compulsory for all schools in Britain, which it previously hadn’t been. Recently, it’s also been suggested that LGBTQI+ issues could also be part of the compulsory curriculum, which would also be a first. Indeed, the Archbishop of Canbterbury came out as an unlikely advocate for transgender children, and the rights of children to use their childhood to explore possibilities in an environment free of judgment and derision. He argues young people should dress and act as they feel, with “freedom from the expectation of permanence.” 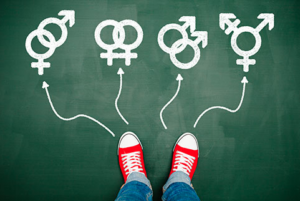 Some would say this move is long overdue

Over the summer, the new GCSE grades were used for the first time, which seemed to go down with a relative minimum of possible chaos – pass rates were pretty similar to the last five years, although boys overtook girls in A Level results for the first time. The new system attracted much criticism and confusion, among both parents and teachers, but is here to stay. If you’re still unsure, you can find out about it here.

Ofsted got a new head in Amanda Spielman, who wants an Ofsted that manages risk intelligently and puts its resources in the right place. “I want to get to a point where people just can’t imagine not seeing Ofsted as a force for improvement in any of its remits. That, for me, would be a big success after five years.” We’re not quite five years in just yet, but Ofsted said they’d consider snooping on the social media profiles of parents and students, to get an idea about certain schools. Sadly, within her first year, Ofsted game in for heavy recent criticism, especially relating to its consistency, reliability and value to the taxpayer. Currently, it’s hardly in the ‘good’, let alone ‘outstanding’ category.

Oh. Prince George started nursery, and for some reason that was news. And he was very excited about the whole thing.

In the most dramatic moment yet of the ongoing education funding crisis, headteachers representing more than 5,000 schools and 3.5 million children across England are supporting a protest letter to the chancellor over “inadequate” funding, that will be delivered to Downing Street.

We saw teachers face a real-terms pay cut of 12% over the last ten years, news of half a million children being taught in ‘super-size’ classes of more than 30, while the same number were also being taught by unqualified teachers. The number of unqualified teachers has also risen by more than 60% to 24,000, up from 14,800 in 2012, when the Government removed a requirement for teachers to be qualified in the specific subjects they cover. The Government has also missed its teacher training targets for the fifth year in a row.

Long-suffering teachers found an unlikely ally in comedian Russell Howard, who stood up for them as doing “one of the hardest jobs in this country.” Maybe this can be linked to the worrying drop in teacher retention rates, which is also massively hurting the education sector. Russell Howard standing up for the teaching profession

The lead up to the election saw the Tories come in for heavy criticism over their plan to re-open grammar schools, and the ever-deepening funding crisis, which frankly I’ve written about so much over the last year or two that it’s becoming tedious. Long story short?

SCHOOLS NEED MORE MONEY, THERESA, GIVE THEM MORE MONEY SO THEY CAN TACKLE PROBLEMS LIKE ASBESTOS, BEING FORCED TO CUT EXTRACURRICULAR ACTIVITIES, AND LOSING THEN BEING UNABLE TO REPLACE STAFF. Not unsettling at all

As you may remember, we had an election in 2017, and Labour focused hard on education in a successful (though not victorious) campaign, while the Tory’s free schools came under fire for wasting £138.5 million in taxpayer money. This was spent opening 62 free schools, university technical colleges (UTC) and studio schools that have either closed, partially closed, or failed to open at all, analysis by the National Union of Teachers (NUT) shows. Suffice to say this could have gone a long way in the aforesaid funding crisis.

In September, Labour shadow education secretary Angela Rayner has announced a ten-point plan for the party’s National Education Service, at the Labour Conference in Brighton. It aims to further involve communities and parents, emphasise collaboration and accountability, draw on evidence and international best practice for improvements and show greater greater regard to learners and educators in terms of their overall wellbeing. Whether we’ll ever see it put into action is another matter.

As well as grammar schools, the Tories also abandoned a plan to end free school lunches for infants, replacing them with cheaper breakfasts, which attracted heavy criticism, although may have saved Theresa May being dubbed the ‘lunch snatcher.’ Also, the plan gave us this zinger from the Liberal Democrats, so it can’t be all bad. In February, academics rallied against Donald Trump’s proposed Muslim ban, and criticised him heavily for appointing Betsy Devos as his Secretary of Education, given her complete lack of experience, and ignorance of the job requirements. Then again, how much can we expect from a man who can say with a total lack of irony “I love the poorly educated.” And Minerva produced this (hilarious) article about what education would look like under a Tory, Labour or Lib Dem government

Oxbridge was rocked by an admissions scandal, as a Freedom of Information request from MP David Lammy revealed a shocking lack of students from certain ethnic and socioeconomic groups, leading to over 100 MPs demanding reform. Universities minister Jo Johnson announced plans for two-year degree courses, which will cover all the same material as a three-year degree, but is intended for students who want to focus more on work, and getting the degree swiftly. The annual cost will be higher (closer to £14,000), but overall students who choose a two-year degree could save several thousand on fees.

Speaking of fees, new analysis also suggests that the UK has – wait for it – THE HIGHEST UNIVERSITY FEES ON EARTH! Lucky students. Although, this is counterbalanced by the quality of many institutions, and disproportional representation in the global top 50 – including three in the top 10 (Oxford, Cambridge and Imperial). Still though….worth £57,000 debt, and more because of the unscrupulous SLC, and increased interest rates that are almost certainly related to Brexit? Hmmm….Fortunately, the Tory’s proposed rise in university tuition fees was defeated in the commons, when the DUP voted with Labour, and they’ll stay – for now – at the current £9,250 a year.

And let’s not even get started on student loans – A total of £51m was overpaid during the last year, and the number of graduates overpaying has increased by 80% in the past six years. A report from the IFS reveals that students can expect to leave university with debts of up to £57,000, taking into account the new 6.1% interest rates (Minerva’s blogger can confirm this figure, after receiving a harrowing letter from the Student Loans Company) – over three quarters of students will never pay back their loan in full. And finally, controversial President of the Philippines, Rodrigo Duterte, labelled Oxford University as a “school for stupid people” (Independent) following a disagreement over a research paper detailing and criticising his social media habits.

In October, we found out that young people are becoming disillusioned with social media, admitting they’re almost addicted, subject to online abuse and bullying, and will take digital detoxes to escape. However, memes, snapchat and a whole world of instagram filters were all cited as redeeming features of social media, and another report suggested moderate social media use can be beneficial, and in cracking news for parents, another study revealed that ipad usage in can improve numeracy, literacy and even communication skills in young children.

A depressing and wide-reaching survey commissioned by the Varkey Foundation, involving 21,000 young people (aged 15-21) from 20 countries, found young Brits had the second worst mental health overall, only ahead of Japan. 54% said money was among their greatest causes of anxiety, and British millennials were among the least likely to prioritise making a contribution to wider society – instead focusing on ‘working hard and getting on with life.’ Stiff upper lip and all that. However, globally, teenagers are generally ‘happy,’ bucking the stereotype of being surly, moody and misunderstood. The avergae score for teenagers across the world was 7.3/10, although Brits were slightly below on 7, with bullying, exam stress and heavy screen/social media use being primary causes of loneliness and anxiety.

Another study suggesting that the Leave vote has left British youngsters, over two thirds of whom would say they have an ‘international outlook,’ fearing for their long-term prospects….but Malala Yousafzai finished school, and joined Twitter! She is using the platform to call for people to help her fight for girls’ education.