Two-year degrees, the danger of energy drinks and, of course, a national failure to deal with snow…

As some reading this will surely know, many, many schools have been closed recently due to the snow. Over 2700 schools were closed on Monday – including all council-run schools in Birmingham – with many remaining closed through Tuesday, including 50 in Hertfordshire. Some schools have faced criticism from parents for closing when seemingly they didn’t have to, and the implicit knock-on effects on families, but they have been defended by union representatives, highlighting the importance of student safety. Graham White, Suffolk representative at the National Education Union, said schools are in an “impossible situation”. He said the choice is between staying open and “risking injury to staff or pupils” or close and “risk the wrath of parents who now have their children at home”.  He added: “Schools are for education, not child-minding. 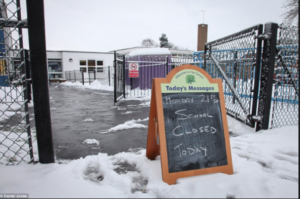 A new study has shown delaying school start times for teenagers can have major benefits, including better academic performance and improved mental and physical health. When students in their mid-teens started school at 10am instead of the usual 8:30am, rates of illness decreased by more than half over a two-year period, and grades improved significantly. The long-term study, which was carried out in an English state school, demonstrated the huge health impact that early start times and more sleep can have on teenagers. Famously, teenagers have a different circadian rhythm to adults, and benefit from starting later in the day.

Universities minister Jo Johnson has proposed ‘work focused’ two-year university degree courses, that would pack in as much teaching and contact hours as a three year course. The proposal is backed by some education leaders including Sir Anthony Sheldon, who believe it could be especially beneficial for mature students looking to retrain, or gain a new qualification in an accelerated time. As Sir Anthony put it, students “Who want to get on with their degree and forsake three-month summer holidays.” However, although the course would cost less than a three-year degree, the annual tuition cap would still likely be some way higher than the current £9,250 a year. Nonetheless, Johnson claims the plan provides better value to both students and taxpayers alike, and believes it could save students up to £25,000. This announcement comes ahead of a wider review of fees and university funding expected in the next few weeks.

Westminster School is the latest independent school to expand into Asia, setting up six new schools in China in one of the biggest expansions of its sort. The school says this move will fund bursaries for disadvantaged students in London. The bi-lingual schools are being created with a Hong Kong education firm HKMETG, with the first to open in Chengdu in 2020. Westminster already sponsors a high-achieving sixth form – Harris Westminster – which does not charge fees.

The new Chinese schools will teach China’s national curriculum, “augmented by aspects of a Westminster curriculum”. But will they be as pretty as the original school?

Although Theresa May has already climbed down on her promise to open new grammar schools, the Archbishop of Canterbury has criticised grammar schools as “contrary to the notion of the common good”. Speaking in the House of Lords, the Most Rev Justin Welby called for education to focus on “drawing the best out of every person”, rather than a selective approach. He said governments should not look to the past and “waste our time rummaging there for the solutions of tomorrow.” His comments were met robustly by some Conservative MPs who argue that grammar schools offer the best for both wealthier and less advantaged students, and were great for social mobility. But it’s hard to argue with the Archbishop’s reasoning: “An approach that neglects those of lesser ability or because of a misguided notion of levelling out does not give the fullest opportunity to those of highest ability or does not enable all to develop a sense of community and mutuality.”

The NASUWT, of the UK’s largest teaching unions, called energy drinks “readily available legal highs” as they contain huge amounts of sugar and caffeine and can have side effects such as headaches and palpitations. They are demanding a ban after research reveals they are often cheaper than bottled water. It comes after research by Fuse, the Centre for Translational Research in Public Health, found that energy drinks were as cheap as 25p and children as young as 10 reportedly bought them to “fit in” or “look tough”. Such drinks usually contain well over the recommended amount of caffeine for children, and may contribute to bad behaviour and lower concentration. Children in the UK are among the highest consumers of energy drinks in Europe.

Tradition of writing Santa a letter being replaced by email – Telegraph

The ancient tradition, going back to the 13th century, is being overtaken by email, a literacy charity warns, as parents seek out more time-efficient ways to contact Saint Nick, that don’t involve a trip to a postbox. The custom is a valuable part of childhood and is “paramount to a child’s development,” Matthew Hickey, chief executive of the Children’s Literacy Charity, said, highlighting the importance of handwriting for future skills, like written exams and filling in less-than-festive application forms. 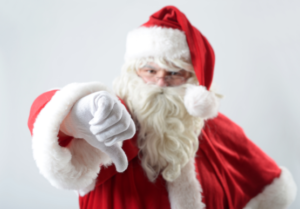 Santa’s not happy with his clogged yahoo inbox